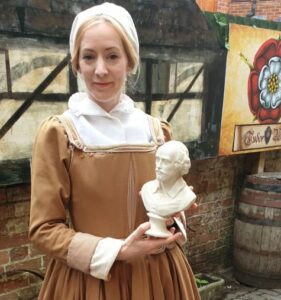 She may be little but she is fierce! Was William Shakespeare talking about his wife?

Tudor World museum is introducing a new tour about Mrs Shakespeare. The museum in Stratford upon Avon have been running their famous William Shakespeare Walking Tour of Stratford upon Avon for 11 years, both for public and private groups as well as for thousands of school children over the years. Shakespeares from Tudor World have appeared with the Baker Boys; History Hit with Dan Snow and with Susan Calman’s Grand Days Out amongst others and now begins a new chapter – a Mrs Shakespeare’s Tour. Mrs Shakespeare will of course talk about her famous husband but also the role of women in the 16th century, as well as her own very incisive take on personal experiences. Like the ‘Mr’ Shakespeare Tour there will be a mixture of facts and entertaining stories and jokes.

The first ‘Mrs’ Shakespeare will be played by Allie Croker who has recently moved to Stratford from London – thereby moving from where Shakespeare made his name and became famous to his home town of Stratford – and keeps her links to Shakespeare’s Globe theatre. Ms Croker is no stranger to the Bard, having appeared in many Shakespeare productions – notably as the Earl of Warwick in Shakespeare’s Henry VI Part 3, directed by Robert Myles – and received accolades in The Guardian and British Theatre Guide respectively for Jordan (Richard Jordan Productions): ‘…a performance from Allie Croker that deserves to win awards’, and Days of Wine and Roses (Theatre by the Lake): ‘The intensity of the performances is shattering’.

Ms Croker said: ‘I’m so pleased to be able to give Anne a voice on this ground-breaking tour. My ‘husband’ may have said “Frailty, thy name is woman” but in my opinion “she is a woman more worth than any man”!’

We use cookies to personalise content, provide social media features and to analyse our traffic. We also share information about your use of our site with our social media and analytics partners who may combine it with other information that you’ve provided to them or that they’ve collected from your use of their services. By using this website, you agree to the use of cookies as stipulated in our privacy policy.